[three_fourth_last]The Economics of the Lottery

Recently I bought a lottery ticket, costing $2, to put my hat in the ring in hopes of winning a lottery.  Why did I do it? What is the economics of this bet?

To begin with, I’m a believing — and struggling — Catholic.

Perhaps the top atheist of all time is Richard Dawkins (The God Delusion).  He has all the up-to-date arguments against religion and is an award winning professor of biology at Oxford University (The Selfish Gene).  Plus, he seems like a wonderful guy who seems very mentally healthy and is living a very successful life. (I met him during a book-signing event.)

Dawkins confidently argues that these mythologies can be translated into premises that can be verified by scientific reasoning, and science has proven that there is a 90% probability that these premises are false. He argues that this is not absolute disproof, for a good scientist must alway leave open the possibility that he will be proven wrong in the future. Thus he gives us 10% wiggle-room.

Of course, scientists arrogate their scientific paradigm onto humanity’s mind, neurotically stating this is the only way to perceive reality.  Meanwhile some people — like two billion of them — say: “No, I can perceive reality using the scientific method, but I can also perceive some forms of reality using my pre-rational, intuitive senses.  Then, I can test these perceptions of reality with my experiences and with my own reasoning, including scientific reasoning.

Let’s see, according to Dawkins, there is a 90% chance that Christianity is a delusional hoax.  This gives me a 10% chance of going to eternal paradise, if I follow Jesus’ interpretation of reality — specifically, if I believe in the existence of a personal, loving God and the existence of an afterlife — and then I put into practice Jesus’ moral guidelines.

Now, back to the lottery.  How does it compare with Jesus’ offer?

Now, what is the dollar value of eternal life within my values?  And what is the value of $125 million if I’m facing eventual suffering and death?  Let’s apply Dawkins’ revered scientific reasoning:  what makes more rational sense?

Life is but a dream

Historically, I rarely wasted the two dollars on the lottery and, when I did, I felt disappointed every time I checked my ticket and it said, “Sorry, you’re not a winner.”  I had the 1-in-14 million irrational idea that I could have won. But I lost. Surprise, surprise. 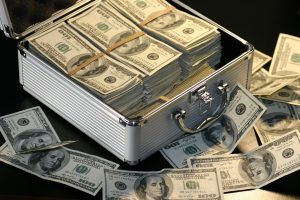 But now, for whatever reason – maybe it’s maturity — I believe that I’m paying the $2 for a little daydream until I check the ticket. After coughing up the $2, I now spend a few minutes every day daydreaming of what I will do with the $125 million if I win.  Then, as days go by, and I spend another $2 here and there, I periodically I modify my fantasy.  Then when the machine tells me I’m not a winner, I don’t feel like a loser.  I got my money’s worth in pleasant daydreams.

Now onto the economics of the lottery.  All those millions of people bought $2 tickets and one person won. But wait……that person has to pay taxes on his winnings.  In Bailey’s case he had to pay 63% taxes. Thus, the government got around $219 million from all the people who bought the dream, minus the costs of running the lottery, and the winner got around $125 million.  Then, the chances are that Bailey will invest a significant amount of his winnings into investments which will help the economy.  And, no doubt he will give significant amounts to friends, family, and charity. And what would have all those people who lost their $2 have done with their bet instead? Bought a Dunkin’s Doughnut? Bailey may contribute more to American culture than those millions of losers.

Thus, it makes sense to spend $2 in order to have a little daydream, help one person have all his or her financial dreams come true, and contribute to the government, to the economy, and to the American culture.

In the same way, it might be a scientific, rational idea to bet on eternal life and to pay the price of the lottery ticket: give up my grudges, love my enemies, treat those who harm me with goodness, treat others like I want to be treated, and pursue meaningful and contributory goals. (Hell, it’s practical to do those things anyhow!)  And if I loose — and there is no afterlife — I’ll never know. I’ll spend the last few moments of my existence with a beautiful (false) mythology.

Not a bad bet.

This site uses Akismet to reduce spam. Learn how your comment data is processed.